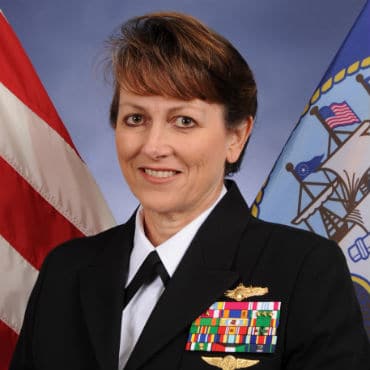 Jan Tighe retired from the US Navy in August 2018 as a Vice Admiral serving as the Deputy Chief of Naval Operations for Information Warfare and as the 66th Director of Naval
Intelligence. Previously, she served as the Commander of U.S.Fleet Cyber Command and U.S. 10th Fleet where she was the first woman to command a numbered Fleet. Other flag officer assignments include President of the Naval Postgraduate School in Monterey, California and deputy director of operations for U.S. Cyber Command.

As a career cryptologist, she served around the globe in leadership positions for both the Navy and the National Security Agency, specializing in Signals Intelligence and Cyber Operations. Tighe is a 1984 graduate of the U.S. Naval Academy and earned a doctorate in Electrical Engineering and master of science in Applied Mathematics from the Naval Postgraduate School, in Monterey CA in 2001.

Tighe currently serves on the Board of Directors for Goldman Sachs, the Huntsman Corporation, Progressive Insurance and IronNet Cybersecurity. She is also on the Board of Trustees for the MITRE Corporation, and the Board of Directors for the U.S Naval Academy Foundation.
Your trust is important to us and we tirelessly work on improving our services and raising awareness about our products, which are designed to ensure our users’ security and privacy. To accomplish these goals, we use cookies that enable us to learn how our website visitors navigate our content and how web users interact with our marketing materials so we can understand how to improve our website and our content.AcceptRejectPrivacy Policy